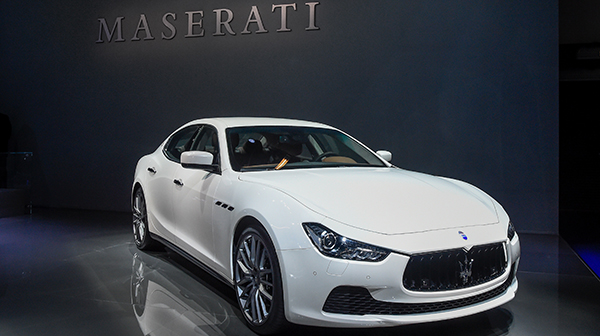 It is difficult to visualise electricity or vibration as we tend to only experience the effects of both. We sense heat as a result of current flowing through a heating element or we feel tremors as a result of vibration applied to a component. In order to measure and display the energy responsible for these effects we can apply PicoScope.

There are two major skills to using PicoScope, capturing the data (scope settings etc.) and the analysis of that captured data. Vibration analysis is no different but while it can be a difficult concept to grasp, it is no different to measuring voltage in a circuit. We apply the relevant probe and settings to measure the effects of an energy we can feel. For most, Pico automotive vibration diagnosis is still in its infancy but the more I use the NVH kit and review the results, the more I seem to discover.

What follows is a case study from a Maserati Quattroporte that both Stuart White and I had the pleasure to diagnose and, more importantly, rectify. Stuart, who owns and runs Complete Car Maintenance (CCM) in Surrey, had mentioned a customer complaint of vibration on the vehicle around 1,600 rpm when stationary and moving.

The challenge with vibrations is that we all interpret them differently (which is why we should measure and not guess), but with this vehicle, you could not deny a considerable vibration throughout in a very specific engine speed range. Starting at 1,450 rpm through to 1,700 rpm the vibration was evident, with peak vibration occurring around 1,600 rpm. Setting up the PicoDiagnostics NVH kit, we could measure the frequency and amplitude of a vibration relatively easy by following the setup wizard within the NVH software.

Obtaining engine speed is the corner stone of any vibration analysis as the engine forms the source from which we calculate all vibrations. The frequency of all rotating components on our vehicle can be calculated once we know engine speed, transmission/differential ratios and wheel/ tyre size.

In this scenario, we have a vibration from the engine when stationary, so engine speed fed into the NVH software via our ELM lead was sufficient to evaluate vibrations attributed to the engine only. The ELM lead uses the J2534 protocol to request VIN, engine and road speed data via the OBD socket. 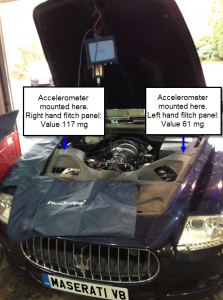 The accelerometer was initially attached to the RH flitch panel (engine bay) as this would appear to be the area of concern given the drivers position in this RHD vehicle. Very quickly, our vibration frequency and amplitude were displayed revealing an uncharacteristic peak vibration of over 116 mg at 40.38 Hz (remember RPM/60 = HZ).

To explain engine vibration orders, think about a four-stroke four cylinder engine. Firstly, all vibration orders are measured in the unit of ‘g’ (acceleration due to gravity). The levels we are looking at occur at amplitudes of mg (millli-g), at various speeds expressed in Hz.

Generally, E2 (second order engine vibration) occurs at twice engine speed and will be the highest level of vibration (for a 4-cylinder engine) given we have two combustion events for every revolution of the crankshaft (two shocks applied to the crank), generating a characteristic high E2. E2 vibration levels can be attributed to combustion events or components rotating at twice engine speed.

On a 6 cylinder engine E3 (and not E2) would be highest, and on an 8 cylinder, similarly E4 would be highest, as should be the case with our Maserati. High vibration levels detected at E0.5 can be attributed to half engine speed components, such as camshafts and associated auxiliaries. Going back to our Maserati, what components could be responsible for our uncharacteristic E1.5 vibration and how could we locate the source? From the above information, high E1.5 orders are typically going to be associated with 3 cylinder engines, yet here we have a V8!

The bar graph below indicates the high level of E1.5 vibration with the included help file: 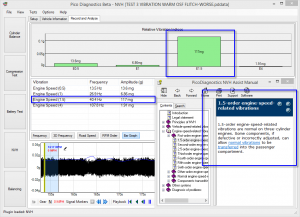 Before diving in headfirst, we must never overlook the basic inspection. Engine oil and coolant level were confirmed correct; whilst hoses, brackets, harness routing and engine mounts were all checked for security, interference or fouling with the chassis.

Cylinder compressions, balance and emissions were also confirmed to be in order and the serpentine drive belt removed to eliminate any auxiliary drive components. With the vibration still evident, this was getting serious! Now it was time to evaluate the schematics of our engine and discover what components were rotating at 1.5 times engine speed. 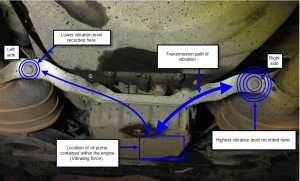 Close inspection of the timing gear/chains arrangement revealed an elaborate engine oil pump drive assembly. The oil pump is located remote from the timing gears (rear right of the engine), but connected via a hexagonal driveshaft. Looking at the relationship between the oil pump drive gear to crankshaft timing gear we have a simple 1:1 drive ratio. Such a ratio should produce fundamental engine vibrations in the first engine order (E1) but could also produce other vibrations (harmonics) depending upon wear to the oil pump drive and components. Think of E1 and E2 in our 4-cylinder engines: E1 is the fundamental vibration, E2 is a harmonic of E1 as a result of combustion shocks induced into the crankshaft at engine speed.

So how can we confirm this area of the engine before committing to a repair? The simple answer is we can’t. We can, however, search around the engine for areas of intense vibration (here we switch to using the accelerometer like a stethoscope). 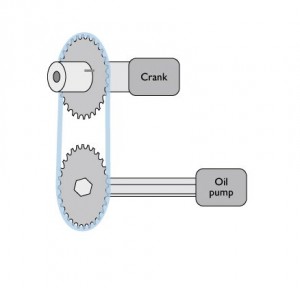 To generate a vibration we need a vibrating force such as the engine, a transmission path such as the exhaust, and a vibrating element such as the vehicle body. Make no mistake here; we are in for a big repair bill for this vehicle. Any diagnostic results we obtain that help to convince both Stuart and I that this engine has to be dismantled is welcomed with open arms.

Remember, it is better to take advantage of the fact we have the fault to play with as diagnosis is to be carried out before disassembly. Once the engine is dismantled we are on our own as reproducing this fault is then impossible.

Recording vibration levels (amplitude) before and after repair in identical locations will provide far more objective test results than using our senses alone as we all interpret vibration differently.

We know our vibrating force is within the engine and the most likely transmission path is the exhaust. Careful positioning of the accelerometer quickly revealed the maximum amplitude of our E1.5 vibration at the lower right side exhaust mounting bracket, which secures the exhaust system to the transmission.

When we consider the seating position of the driver who complained about the vibration (this is a right-hand drive vehicle), and we now know the engine oil pump speed and its location in relation to the transmission path. We can see a pattern forming…even mounting the accelerometer on the left side flitch panel produced lower vibration levels than the right-side flitch panel. The real beauty of the Pico NVH kit here is that we can take very quick and accurate vibration measurements without making assumptions.

Comparison testing is invaluable when evaluating any vehicle during diagnosis. Using PicoScope we can now test and measure vehicles in a way the manufacturer never intended. By this, I mean we have a dynamic insight into component operation and behavioural functions that we simply have no technical data in which to confirm our results. For example, how many manufacturers quote vibration levels of their vehicles at varying engine and road speeds? Luckily for us, Stuart had been able to confirm a donor Maserati displayed a characteristic cabin vibration at identical engine speeds, but at an acceptable level consistent with this style of performance engine.

So, where do we focus our attention when attempting to reduce this vibration level? The body is our vibrating element but we simply cannot quench the floor pan etc. to improve the vibration. The exhaust is our transmission path but it is simply transmitting the excessive vibration originating from the engine. We therefore have to tackle the vibrating source (the engine) which has to be best practice in this scenario as catastrophic damage could be ahead if ignored.

To summarise what we know:

Time to strip down

Armed with all the above, we had enough evidence to request removal of the sump pan in order to reveal the components attached to the cylinder block, the oil pump in particular. With the sump pan removed, no further vibration measurements could be taken, highlighting the importance of all the actions carried out prior to this commitment. 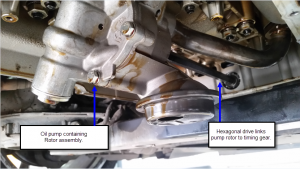 The oil pump/drive was removed to enable access and inspection of all visible components in the crankcase ensuring good security (bolt check) and no visible interference/witness markings. All were OK.

Given E1.5 was our vibration of concern, the oil pump was then dismantled and measured for wear between: pump housing and driven rotor, drive and driven rotor and driven rotor side clearance. Whilst some evidence of scoring was visible to the pump housing, all measurements were correct (no real surprise here given that the engine had not suffered any oil pressure related issues). 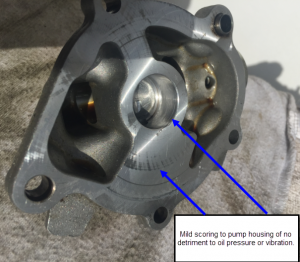 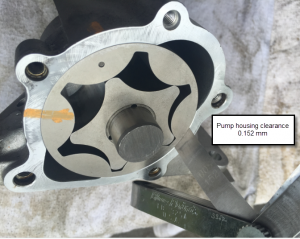 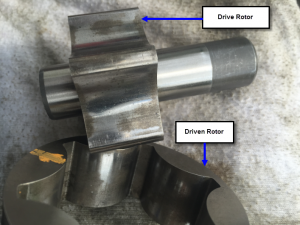 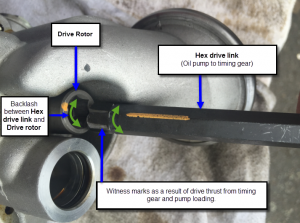 A straight edge and feeler gauge were applied to the hexagonal drive to highlight any distortion and returned a value of 0.076 mm towards the oil pump drive rotor (no specifications exist for this measurement).

So here we now have a decision to make surrounding what components to replace based upon our visual inspection, vibration test results and measurements taken. At the centre of all this information we have the vibration evident at 1.5 x engine speed (E1.5).

The oil pump drive rotor will rotate at engine speed (1:1 ratio with the crankshaft) but is subjected to 6 x pulses applied as a result of oil compression between the drive and driven rotor. This would be a sixth order engine vibration (E6) and one which is simply not evident. Could the loading of the oil pump upon the hexagonal drive with a partially worn/distorted hex drive produce an E1.5 vibration?

Oil pump and drive load (from the engine) applied to the hex drive, which has good face contact, would produce little or no vibration, whilst load applied to a worn hex drive face has the potential to generate noise/vibration (remember noise and vibration are one and the same). 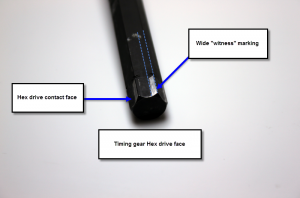 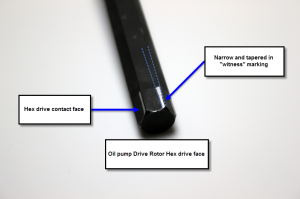 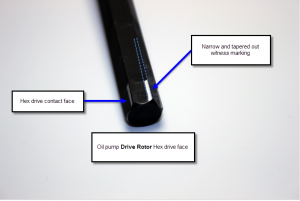 Upon reassembly it became immediately apparent there was minimal rotation (backlash) between the hexagonal drive and oil pump drive rotor, resulting in an instant transfer of drive to the oil pump. The engine was reassembled and the accelerometer placed in the identical position to measure the vibration level at 1,600 rpm. 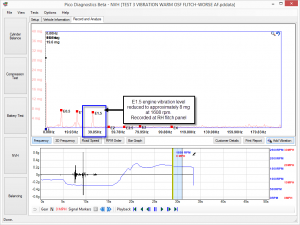 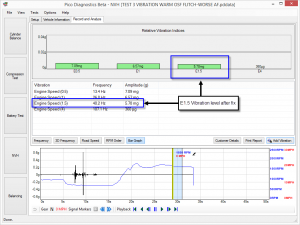 Immediately, the vibration level at 1,600 rpm throughout the vehicle had improved (not completely removed) and the values obtained speak volumes, 113 mg before fix and 6 mg after fix.

With hindsight, it would have been fantastic to analyse the fluctuations in engine oil pressure using the WPS500X pressure transducer before and after fix. Could it have been possible to see fluctuations in oil pressure at 1,600 rpm as a result of the wear in our oil pump drive? I guess we will never know but worth considering now we have PicoScope and all these new measurement techniques at our disposal.

Objective results before and after fix have proved invaluable as a characteristic engine vibration remained evident at 1,600 rpm but much improved and backed up with undeniable evidence presented by our NVH kit confirming the repair. A big thank you to Stuart White at CCM for his assistance and support throughout this challenging and rewarding case study.