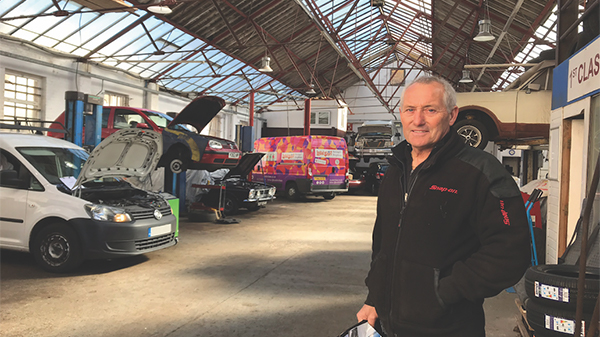 Autotechnician heads to Brighton to see how Steve Kennard keeps his business ticking over with general servicing/repairs, MOT work and caring for classics, and how a new engine cleaning service has proven a win-win situation for both the workshop and its customers.

Steve Kennard opened 1st Class Garage in his hometown of Brighton back in 1993 and aims to provide a main dealer level of service, without the price tag. They take on all repairs, servicing and MOTs on both newer vehicles and cared-for classics, which is clear as I look around the Grade II listed workshop. I ask Steve what he considers to be one of the biggest challenges of recent years and he jumps straight in with the way vehicle electrics has evolved. “Years ago, if you had a little bit of a high resistance somewhere, a bad connection, half a voltage drop made no difference to that circuit operating but now, 0.5V drop on something that’s operating 3V is a huge difference and it creates all these problems. There’s more components on the cars, and the wiring harnesses have got smaller wires carrying lower voltages, and I don’t think they’re fit for purpose. We get a lot of connection problems – where it’s wiring issues rather than component failures. Trying to track down those problems is time-consuming.”

Getting to the route of faults quickly comes from experience and knowing how to get the most out of your tools. Steve talks about the importance of practical ‘on the tools’ training for youngsters starting out and how he is still learning after many years in the trade. He often asks the team if there are areas they feel they need to brush up on. “Our first port of call is through the Autofirst network and find out what courses they have – whether they need to go off and attend one or take one of the virtual courses online. We need to be mindful of new systems that are coming out all the time and of where the industry is heading, with the likes of electric vehicles and hybrids.”

Steve clearly has a passion for working on cars – we stand talking within the large workshop, two streets away from Brighton’s seafront, surrounded by vehicles both old and new. He points out his old Capri and Cortina behind us. Towards the back of the garage sits a 1600 E-type Jag that has been brought in by a customer who has recently purchased it, which has been modified with a V8. “I’m envious, it’s in pretty good shape for what is essentially a 50-year-old car.”They take on a lot of work with classic and older cars, which of course entails plenty of welding. “Two years ago, we had a Jenson Interceptor in, anyone who’s familiar with them will know they rot quite badly on the seal areas. Once you take the outer seal off its not as easy as just replacing with another, you’ve got to put the strength back in, so the inner seals that you can’t see, all have to be cut out and rebuilt and, in some cases, we have to make up panels to fit.”

Steve recently invested in some workshop equipment that has proven effective on both new and older vehicles, using FlexFuel’s Hy-Carbon machine as a solution to carbon-related faults and as a preventative measure during an annual service. FlexFuel introduced Hy-Carbon to the UK aftermarket last year, after years of serving the French rail network, marine and heavy commercial industries. Steve was introduced to Hy-Carbon last November and he was initially sceptical. “I’m one of the original sceptics…to me, the proof is in the pudding. I run a Ranger, it’s only two years old, so I used it on that to see if there was any difference. I’ve got to say, I was amazed. It had only done 16,000 miles and I didn’t expect to notice much of a difference – after running it through an hour’s cycle on the machine, I drove it and it was smoother, more responsive and better on fuel.” 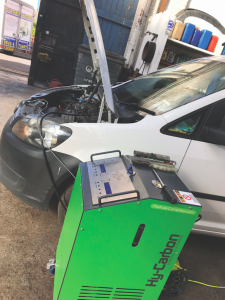 A VW Caddy was hooked up to the machine while I was there. “We’re putting it through a cycle – it has a fault with an EGR valve, very common,” says Steve. “Carbon is the big killer. There are lots of chemical additives out there that you can put in and run various cleaning processes but that’s chemicals – the beauty of this is it’s just using distilled water. It takes the hydrogen from the water and runs through the air intake. There are 30, 60 and 90-minute cycles. This one’s on the longer cycle, it’s done 100,000 miles, there’s going to be a lot of carbon in there.”

“It frees up injectors, throttle bodies, manifolds, EGRs and the exhaust system – this breaks it down. We’re suggesting our customers have it done with a full service and I think just about everybody has commented there’s a noticeable difference.” After using the Hy-Carbon on his brother’s taxi, he hopes to get in all the local cabs so they can see the benefits for themselves. They charge just over £100 with VAT for a 90-minute cycle. “We say to people to have it done annually to keep the carbon down. It’s a win-win situation for everybody. For us its very simple, we set the machine up, let it run and walk away. The EGR Pilot on the Hy-Carbon runs the EGR through cycles throughout the cleaning process, toggling the EGR and freeing it up. We’ve had vehicles fail an MOT on emissions, so we’ve suggested putting it through a cycle first. If it ends up needing a replacement part, we won’t charge them for the clean but around 80% have passed the emissions after it. Its been very successful. Apart from the odd one or two that has an underlying issue, of course. This way is a lot more cost-effective and efficient. It has reduced the amount of components we’ve had to replace on cars. Now, this is our first, go to process, to get it through the emissions test.” 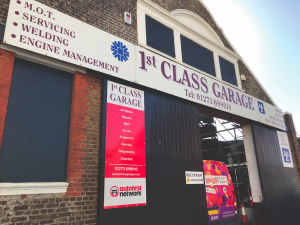 Before I leave, I take a look at the reception area, which displays their various professional associations; with the Good Garage Scheme and the AA, they are part of the RMI’s Trust My Garage as well as Euro Car Parts’ Autofirst Network, which has recently merged with RAC Approved Garages. Customers are able to book their cars in online, have a comfortable waiting room and WiFi to use whilst there and can access a courtesy car if need be. “You’ve got to be professional,” says Steve, “to get away from the back-street garage/grease monkey image. These guys here are highly skilled – I’ve got over 40 years in the trade and I’m still learning, but I enjoy it.” I ask if there’s plans to wind down anytime soon. “I’m getting to that stage where I’m thinking it’s time to sit down. There’ s always retirement on the horizon but I didn’t build the business to just shut the doors and retire. It will certainly be sold on, passed on, or it would be a huge waste. Id like to see it still going in 20, 30 years, long past my time.”

Thanks to Steve and the team at 1st Class Garage for their hospitality. We’ll be back to see how Flex Fuel’s Hy-Carbon performs on a 14-year-old Saab 9-3!