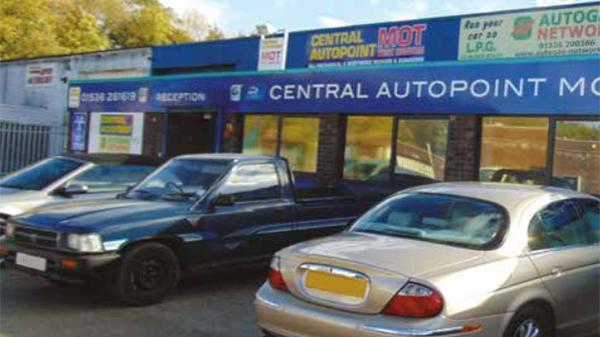 Last year, I went along to one of Hella’s ADAS training days and was encouraged to see several independent workshops researching the idea of taking on the dealers in the calibration of vehicle safety systems. This demands a significant investment in equipment, but savvy businesses who can manage the outlay will be in a strong position to retain work and provide a complete service offer to customers.

At the training event, I met Martin Brothwell, Business Development Manager at Central Auto Point – the largest independent garage in Corby. He was keen to get involved in ADAS calibration and was also looking at purchasing a diamond cutting lathe to repair wheels in-house. Impressed by their business plan, I went along to Central Auto Point to gain some insight into their success.

Established over 30 years ago, the family business continues to grow from repeat customers and word of mouth recommendations. Customer satisfaction and offering value for money are placed high on their agenda and this has resulted in expansion, while workshops around them have fallen. When I arrive, Martin first shows me the inviting waiting room where customers can view the MOT bay and leave reviews of their experience on the PC. Martin explains the business is very much a family affair, as I am introduced to the owner’s sister Cathy who manages the office, with other sisters, brothers and son also involved. The business began back in 1973 and local businessman Alex McConnell took over 10 yrs ago. Martin was taken on as a business development manager three years ago and things have moved on considerably. The apprentice of 15 years ago is now the head mechanic, the 2,000 sq ft unit is a well-equipped workshop offering a full range of services and staff has increased from five to 19. They’re now looking to expand out the back, which would increase floorspace to 20,000 sq ft.

The large workshop is a hive of activity when I arrive, we first encounter Ryan who is working on a rather tasty Porsche Panamera “We work with a car dealer in Peterborough, who sell second-hand cars that look like they’ve just come off the assembly line,” explains Martin. “They’re top notch cars. We do all their repairs and bodywork. We’ve had Maseratis, Porsches, … We’ve got a car out the back that’s bullet-proof, with a gun holder in it… God knows where that came from!” 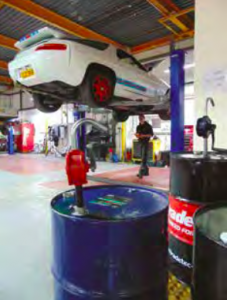 The workshop was an empty shell when they took it over three years ago, it now has six ramps and two MOT bays. They conduct around 20 MOTs a day, 7 out of the 9 mechanics here are MOT testers and the other two are being trained. It’s remained a lucrative part of their business: “The tyre company we deal with, they do MOTs but if they get swamped out, we do them here”, says Martin. They also have a fully kitted bodyshop and spraybooth, they offer remapping and will be adding diamond wheel lathe cutting and ADAS calibration to its menu. Four-wheel alignment has always been pushed at Central Auto Point: “Prior to an MOT or service we do a free wheel alignment check,” explains Martin, “and irrespective of whether it passes the MOT or not, we’ll attach the report to the back of it with the results and charge £35 to put it right, if need be. We also do DPF cleaning – we have a dedicated website just for that. DPF issues are a nightmare, so we give them a 15-minute consultation to give them an idea of what might be wrong, and we charge £165+VAT for a DPF clean.”

Head Technician David McAllister explains: “If a customer comes in I’ll scan it and see what faults are there, but I’ll explain to them it needs to be diagnosed first – if your DPF is blocked we need to cure the root problem.” I ask David if DPF problems occur because of driving conditions; with too many short commutes and not enough high-speed driving to reach the right temperature to automatically rejuvenate. He thinks not, with many underlying issues being at fault with the vehicles he sees. David says he’s seen problems with glow plugs on Nissans and Renaults, a Ford Focus had been in with a fuel vaporizer that was partly blocked and a local taxi had been taken to a VW garage before being brought to Central Auto Point for further investigation. “One sensor was reading -300C, the other 3000C, which obviously isn’t right. It will not regenerate, or let you do a forced regen. It was a corroded sensor, so we cleaned it up and changed the sensor.”

Their bodyshop continues to thrive, thanks to the good reputation of their technicians. Martin says: “We’ve had a 7.5 tonne truck in there, it was white and the chap wanted it silver. A lot of the work we do comes through the door – they’ve had a bump in the car park and they don’t want to go through the insurance. A lot of it is down to word of mouth, the two we have working in there are good lads, they have a lot of experience and have worked in high profile places.”

Unlike many independents, getting the right people has not been a problem to date – with all staff being recommended so they’ve never had to advertise for new members. “We’ve had apprentices in the past,  we’re hoping to get our last one back in fact. He was keen, helping out on servicing and 4-wheel alignment but he went off to an engineering apprenticeship.”

They make sure staff attend training regularly and have recently sent them on hybrid courses. One of the guys is a Citroen Master Tech and Ryan has a Vauxhall/Ford background. They prefer it here than at the dealerships, says Martin, “It’s a friendlier atmosphere. I know we’re here to do a job, but you’ve got to give and take a little bit. There’s lots of banter and we’re very sociable, we go out together. They address any gripes they have during a bi-monthly team meeting and we ask the mechanics for suggestions.

“Corby is a large, connected town and there’s a lot of competition so you have to draw people in. For instance, the diamond wheel cutting and ADAS calibration – no-one else is doing that. When you get them in it comes down to pricing and service. Don’t get me wrong, we’ve had our issues and customer complaints but its how you deal with it that’s important. 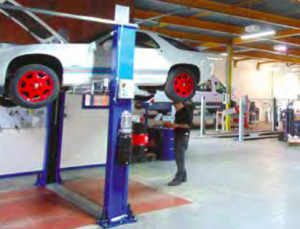 “Our labour rate is £40 an hour, which is about the standard around here. Vauxhall dealers are charging £60/£70. Do we want to start competing against the dealerships? Not really. We’re busy enough as it is and we don’t need to. Its about the service you offer and the facilities you have.”

They have three bits of diagnostic equipment on-site, charging an initial £65 for a check, then take it from there. Martin has found that customers with newer cars are scared to use independents, believing their warranty will be affected if they don’t get the work done at the dealers – “When we explain that’s not the case and that we use OEM parts, they’re quite happy,” says Martin.

Martin thinks they’ll start seeing more hybrid servicing and has prepared by training up staff. The garage recently won a council contract to maintain its fleet of 76 vehicles, six of which are hybrids. The garage also undertakes LPG conversions and sells LPG and says this continues to be a successful line of business for them. 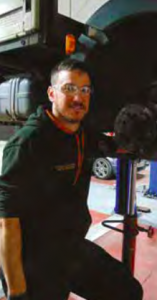 Martin is always looking at new revenue opportunities and it was a conversation with a local dealer that instigated their next investment in a diamond cutting lathe. “A customer went to the dealer with an older car, still worth £35k, who wanted the scuffed wheel sorted by the next day. They would have to send it off to a place in Leicester and it would be a 3-day turnaround, so a new wheel was ordered in for £600!”

Thanks to Martin and the whole team at Auto Point for taking the time to share their insights with us – we’ll check in with Auto Point later this year to see how their new investment is working out.