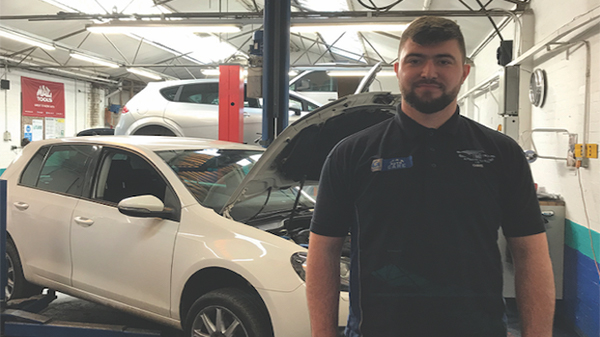 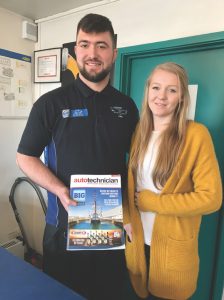 Autotechnician visits Chris Trevitt, who heads up the team at TMR, to talk about his evolving diagnostics bay and how his tools are helping him to educate customers on the fault-finding process.

TMR Automotive is a family-run business in Nuneaton managed by Chris Trevitt, who took over from his parents two years ago when they could no longer manage it due to ill health. “It was all new to me. It was a big step but one of the best decisions of my life.” Chris experienced a steep learning curve at the beginning but says he was well supported by GroupAuto (TMR have been part of its Autocare approved garage network since 2006) and the technical team at Delphi.

He purchased the DS150, a pass-through device and scope from them two years ago to build their diagnostics offering and has taken advantage of their technical support ever since.

The five-strong team at TMR consists of his partner Nicky and mum Jane who run the office and their social media, with Tom and Aaron working alongside him in the workshop. They have three ramps, a hybrid bay and most of his time is now spent in the diagnostics bay. They are kept busy with a loyal customer base and manage to keep their labour rates at £50 to remain affordable to the local community. Chris is looking to expand this year and put two service vans out on the road to complement its recovery truck, Chris says: “It will be less waiting around for the customer and they won’t have to pay recovery charges.”

Since taking over two years ago, Chris has moved away from the servicing and general repairs to invest in diagnostics, which he enjoys. “Having Haynes Pro through the Delphi tools is a big help because you can just look up the reg and that gives you all the details on the battery, tyres and all sorts of makes and models of injectors. I can order them straight from my parts supplier without looking at the car.” He also uses pass through, accessing Volkswagen and BMW manufacturer information. Delphi’s VCI is his main tool: “It’s just so simple and easy to
use. Every time a car comes in with an engine light on, it’s straight in. It’s wireless, (using Bluetooth) so we don’t have to shuffle the workshop around. We can plug it in out the back
in the car park and still communicate with it from inside. It’s a lot less hassle and the customers don’t want to be hanging around. Nine times out of ten, the engine light comes on and it’s something they weren’t expecting. They want it sorted as quickly as possible.” 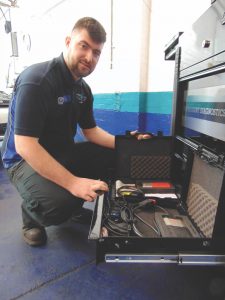 I ask Chris if his customers are receptive to the time and effort that goes into diagnostics as part of the overall repair. “You always get those difficult customers that just don’t understand but I can bring the laptop out to reception and show them the live data and what the fault codes reading. Using the VCI linked to the HaynesPro is phenomenal, without that you’d struggle to find faults and spend hours looking at wiring diagrams. It’s got lots of shortcuts. I’ve got an ‘09 VW Golf in at the moment, it came in running uneven and the engine light was on. I checked the fault codes out, it was a camshaft sensor and crankshaft correlation that links to the timing chain, it was stretched.

As with any skill or trade you are involved in, the more experienced you become, the more you invest in training and sophisticated equipment to keep up with the latest technology, resulting in a faster fix. This is where a diagnostic fee comes in to fairly charge for your expertise. “We charge £40 an hour for diagnostics and I aim to diagnose a fault in the first hour. If I don’t, I ring the customer with an update and a step-by-step review. We keep them in the loop, we’re honest. At lot of customers come here because they feel they’ve been ripped off elsewhere. I think it’s how people word it differently. Sometimes, we have people who won’t take our word for it but when you have evidence here on the laptop and they can see live data it backs you up with hard evidence.”

TMR’s core business consists of MOTs, servicing and annual checks for a loyal customer base and they also get referrals from local dealers, but their reputation for fault-finding is growing. “We’re known in the area for the diagnostics. Other garages and car sales bring the car here rather than go to the main dealer. The access we have using the DS150 and the VCI package is pretty much what the dealers have anyway.”

Operated from a workshop’s own PC or laptop, DS150E gives technicians access to full range of diagnostic functions. Connect the VCI to the diagnostic socket and it communicates via Bluetooth with the DS diagnostic software installed on the PC.

Thanks to Chris & the team at TMR for their time & hospitality (I will return to get my coffee with one Nicky!) A family who had a change in circumstances and faced the challenge head on, with a little help from their friends and suppliers. If you’d like us to pay you a visit, email Nicola@autotechnician.co.uk.