LATEST NEWS
You are at:Home»Article»So Solid Crew? DMFs and SMFs

When a DMF has spun its last, should you always replace like-for-like, or should you offer customers the SMF option? autotechnician investigates…

The use of the Dual Mass Flywheel (DMF) in clutch systems is now very common – every second vehicle built in Europe is fitted with a DMF as original equipment. The technology is used by vehicle manufacturers around the world to efficiently remove harmful vibrations from the drive train.
The DMF dampens torque variation by splitting the flywheel mass into two, with an array of large arc springs inside the sandwich. A compact DMF (or DFC) can encompass the whole clutch, including pressure plate and friction disc. Freeplay and bearing ‘rock’ need be measured when the DMF is checked during clutch servicing to determine whether the flywheel is functioning adequately.
SINGLE MASS FLYWHEELS
When a DMF finally wears out and needs to be replaced, some garages will offer a Single Mass Flywheel (SMF) as an option. SMFs offer a more traditional set-up with direct contact between the engine and clutch. They can be cheaper to install due to the lower cost of the part. Technically, the heavy mass of the solid flywheel reduces engine vibration.
The development of the DMF clutch has provided improved driver comfort and refinement, but SMF kit suppliers say the DMF design makes it difficult for heat built up during operation to be dissipated through the two masses of the flywheel. However, DMF suppliers point out that the heat build-up is expected and not actually a problem.
DMFs are designed and engineered for each specific application in conjunction with the vehicle manufacturer, who then tests, approves and fits it as original equipment. SMFs are not a VM-approved replacement and fitting one may affect any warranty remaining on the vehicle. In addition, it is possible that related components in the drivetrain may be put under greater strain if a DMF is replaced with an SMF.
SMFS ARE THE RIGHT SOLUTION FOR CERTAIN VEHICLES
Commenting on the Single Mass Flywheel, Malcolm White, product director at Borg & Beck says: “The best solution on certain vehicles is SMF. The SMF allows DMFs to be replaced with a traditional solid flywheel and clutch kit. This has been made possible through development of the long travel damper. Borg & Beck created a damper capable of 40o of torsional movement, comparable with movement typical of the originally installed DMF.
“Some early SMFs made by other manufacturers had dampers that could only reach 20o of torsional movement, which led to the concept being viewed with scepticism in some quarters. Our innovations mean the SMF provides a practical option.” 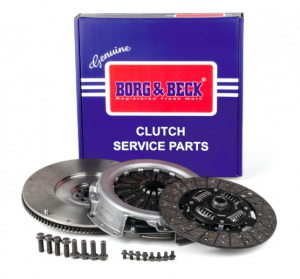 COST ADVANTAGES
Malcolm White continues: “The cost of a subsequent replacement is reduced further by the fact that the flywheel does not need to be changed with the rest of the clutch components. “Perhaps the greatest benefit to the motorist is the fact that the heat issues inherent with the DMF system are nullified when the solid flywheel replacement is fitted. This is because the traditional design of the system allows the heat to be absorbed through the flywheel and dissipated through the flywheel housing.
“Making the choice between direct replacement and opting for a SMF depends on the vehicle and usage. Vehicles that have high annual mileage, low speed city driving applications, or LCV and taxi applications operating in a demanding environment, experience the most DMF related problems. Examples include the Vauxhall Combo, Fiat Ducato, Ford Transit and the Toyota Avensis.” He adds: “Despite what is said or felt about SMFs, Borg & Beck SMFs offer a solution for vehicles where the original DMF is unable to dissipate heat effectively, they offer greater longevity over DMF technology and they are much more cost-effective to replace.”
IDENTIFY THE CAUSE OF FAILURE
All good things must come to an end: “Like any other component, the DMF is a wearing part,” observes Malcolm Short, Technical Services Manager at Schaeffle (UK) Ltd. “While it is essentially engineered to last a long time under normal operating conditions, it can wear out quicker under certain circumstances. If a DMF does fail, it is very important to not just replace it, but to correctly identify the cause of the failure. “Just installing a new DMF or converting it to an alternative system, may not fix the underlying problem and you will be heading for another premature failure.
“It is worth remembering that replacing the DMF with a non-genuine, unapproved and untested conversion kit will not fix any existing problems. In fact, converting could transfer even more abnormal vibrations through the drive train and lead to further expensive repairs.
“Fitting a solid flywheel replacement will also have a detrimental effect on fuel consumption, which has been found to increase by as much as 13% under strict test conditions.” 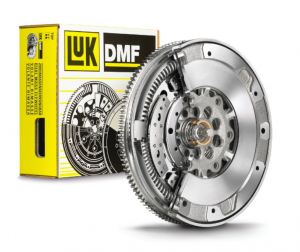 THE VIEW FROM THE WORKSHOP
When replacing a DMF, do you go down the SMF route or replace like-for-like? Nigel Yardley owns Yardley’s Garage, based in Sutton-in-Ashfield, Nottinghamshire. He says: “We always do like-for-like. We’ve never fitted a solid flywheel conversion and have no intention of doing so. “Why would the manufacturers have gone to the expense of putting something in if they could have done it cheaper? It’s not like them to do that. That’s the way I look at it. They did it for a reason.
“There were a pair of demonstration BMWs at Autoinform a while back, one had the original DMF, the other had a solid flywheel conversion. One of my guys had a run out in both of them. He commented on how noticeably different they were.”
Shaun Spooner is the owner of Shaun Spooner Autos, based in Cheadle. He says:
“I never fit solid conversions. When they first appeared, I fitted one to a 2001 Ford Transit 2.4L RWD. After a week, it came back on a recovery truck with a massive hole in the side of the gearbox, so I replaced it. A fortnight later it was back again – the new gearbox was noisy so it was removed and sent back under warranty.
“The gearbox supplier rejected the claim saying the solid conversion had caused excess wear on the internals. I would have normally argued the point, except I had never told the supplier I had fitted a solid conversion.
“That was a big lesson learned for me and I’ve never fitted one since. Oddly though, I have since had fliers from Ford advertising their range of genuine Ford solid conversion kits for Transit vans. I notice they also supply a front crankshaft pulley, although I never really dare try another one.” 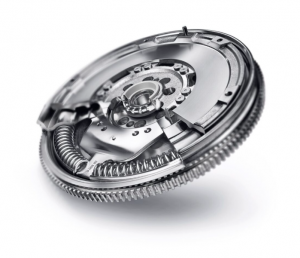 ACCURATE ADVICE
Prevention is better than cure says Malcolm Short: “Driving style is a major factor in protecting the DMF from premature wear and possible failure. Advising customers to drive sensibly and using the correct gears will always deliver the best fuel economy, plus protect the engine and drive train from wear.
“You should always be prepared to offer simple and accurate advice about DMFs, explaining what work is required to maintain your customer’s car to the standards they expect.
“A DMF may cost a little more than a solid conversion kit, but the possible fuel savings and security of using OE components considerably outweigh the risks associated with changing the engineering integrity of the engine.”
BAD VIBRATIONS, GOOD DIAGNOSIS
“Many factors can lead to abnormal vibration levels,” says Schaeffler’s Malcolm Short. Every professional mechanic should be aware of all of them to accurately diagnose and repair the real fault.”
ENGINE ‘MISFIRES’: Both static and under load.
UNEVEN RUNNING: Cylinder to cylinder imbalance will have a major effect.
COMPRESSIONS: Low compression on one cylinder will create an engine imbalance.
STARTING ISSUES: Coughing and spluttering on start up will create extra vibration.
CRANKING SPEED: Slow cranking speeds will cause prolonged and excessive activity within the DMF
Towing excessive loads will push a DMF beyond its limits, common with LCVs.
CHIP TUNING: The damping rate of every DMF is individually tuned to the engine to which it is fitted, choosing to ‘mod’ the engine or ECU can drastically shorten the life of the DMF.
DRIVING STYLE: Trying to save fuel by driving in the wrong gear will labour the engine and create more vibration, this is common with taxis. 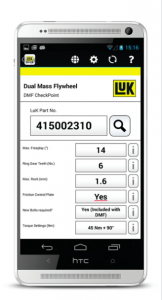 DMF CHECKPOINT
Schaeffler’s LuK DMF CheckPoint is a mobile app for mechanics regularly servicing clutch systems including a DMF.
You simply enter a LuK DMF part number into the app and instantly see all the correct operating tolerances and bolt torque settings that are unique to each DMF. The app also links to REPXPERT and the REPXPERT technical hotline.